Brushstroke Creatives, under Union Inks and Graphics Philippines, Inc., one of Primer Group of Companies’ subsidiaries, again excelled in its field!

On August 10, 2018, Brushstroke Creatives’ booth at the Stores Asia Expo 2018 was hailed as among the eight Best Booths in the two-day event held at the SMX Convention Center, Mall of Asia Complex, Pasay City. 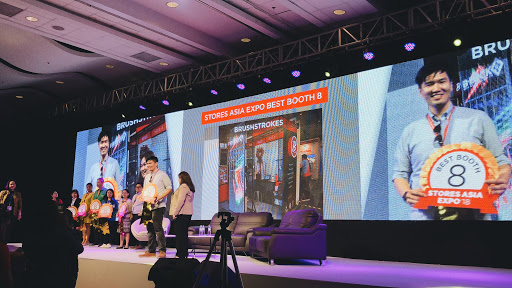 Exuding eye-catching elegance in black with a prominent red and white Brushstroke Creatives logo and a vibrant LED wall featuring the Primer Group logo, the award-winning booth displayed its globally competitive works and services, along with its highly applauded projects.

Event attendees took a closer look at the journey and story of Primer Group concept stores Bratpack, Recreational Outdoor eXchange (R.O.X.), The Travel Club, Grind, and SneakPeek through the booth.

The Stores Asia Expo 2018 is part of the 25th National Retail Conference, which is the biggest and most important event in the Philippine retail industry, as it draws over 800 retail owners, top-level executives, and industry suppliers. The event was organized by the Philippine Retailers Association.

This article originally appeared on The Primer Post: https://theprimerpost.wordpress.com/2018/08/13/brushstroke-creatives-among-best-booths-at-stores-asia-expo-2018/